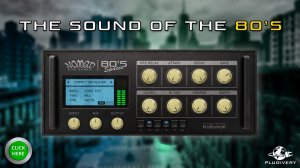 Nomad Factory in association with MoReVoX and Plugivery Distribution today proudly announce the release of their latest plug-in, 80’s Spaces. It is a uniquely designed plug-in that captures the essence of the spacial ambiance heard on many of the greatest records of the era.
80's Spaces is an original “80’s vibe” plug-in that was initiated by Nomad Factory’s founder Bernie Torelli of Nomad Factory and Eric Nolot, President of Plugivery Distribution, 3 years ago.


80’s Spaces is the most original and creative plug-in ever built by Nomad Factory. It “magically” reproduces the typical reverbs and spaces effect units (that are still expensive today) used in the 80s by legendary artists such as Michael Jackson, Madonna, Duran Duran, Guns N’ Roses, Tears for Fears, David Bowie, Depeche Mode, U2, Eurythmics, George Michael, Phil Collins, Queen and so many others.


All of the different ambiences that define the characteristic ‘sound’ of the 80’s are ready to be exploited with hundreds of finely tuned impulse responses and presets created by Sabino Cannone at MoReVoX. Classic gated reverbs, the lush cavernous and sweeping tails, short rooms and chorused verbs are all here with minimal adjustments required in a user friendly interface with mix blend, chorus, decay, gate, filter and a few other parameters at hand.


“The moment I heard it coming back at me, I knew I was back adding reverb to a Bangles vocal. And the chorus and width functions are perfect additions for this decade!".
- David Kahne (Producer - Paul McCartney, Regina Spektor, The Strokes, Ingrid Michaelson...)


80's Spaces can be downloaded from the product page at Plugivery:
http://www.plugivery.com/products/p3054-80s-Spaces/

About Nomad Factory
In 2001, focusing on experience acquired through over 25 years of analog engineering, Bernie Torelli, the founder of Nomad Factory started developing products reminiscent of 60's and 70's technology. As an engineer working at Track Star Studios in San Diego, California, Bernie quickly replaced the studio's standard plug-ins with his own.


A host of top notch player's passing through could not help but notice the amazing sound quality, combined with user friendly features. After being asked over and over if these products were available on the market, in mid-2002 Nomad Factory became an official company selling plug-ins on the internet. Since his passing in January 2016 Plugivery has completed his projects and gone on to introduce new plug-ins to carry on the proud tradition of the Nomad Factory excellence for audio software products.


Plugivery is a B2B (business to business) distribution service whose purpose is to introduce audio software products into hundreds of music stores all around the world carefully considering every need of a truly professional distribution service based on electronic delivery. The name Plugivery comes from the combination of the words "Plug-in" and "Delivery".